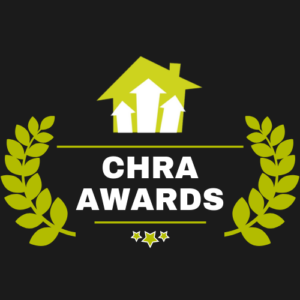 We encourage and celebrate excellence in the Canadian housing and homelessness sector by honouring exceptional people and programs that help ensure a safe and affordable home for all.

National recognition
We recognize and celebrate our members' contributions by drawing attention to exceptional achievements on a national stage. Showcasing award winners' successes provides an opportunity to learn from the best in housing and community development, inspires positive change in the housing sector.

A member-driven process
We encourage our members to participate in our awards program by nominating a person or an organization to receive honour. The program is adjudicated by a volunteer Awards Committee that makes a recommendation to our Board of Directors. We thank our volunteers who contribute time and effort to make this award program possible.

Recognizes an individual, a business, or an organization that has had a major impact at the community level in promoting affordable housing and/or preventing and ending homelessness. Award details

Recognizes an organization, business or partnership that has undertaken a program, a new build or retrofit project that advances sustainable development, resource conservation or community renewal. Award details

Recognizes an individual who has shown leadership in improving housing in Canada through program innovation, policy change, outreach and/or advocacy efforts. Award details

Recognizes an individual with years of service in the affordable housing sector in Canada. This award is generously sponsored by CMHC. Award details

Recognizes a CHRA member – an individual or an organization – that has actively supported Rooftops Canada’s international development work. This biannual award is administered by Rooftops Canada which selects the recipient in consultation with us. It will be awarded in 2020. Direct your question to Barry Pinsky, Executive Director at Rooftops Canada International, at barry@rooftops.ca.

This award celebrates a community builder who has shown an extraordinary commitment to ensuring decent, safe and affordable housing or who has shown dedication to ending and preventing homelessness in their community.

This award salutes achievements in the areas of sustainable development, resource conservation and community renewal.

Focus: cemonstrate results at a local, regional or national level.

This award recognizes individuals who have significantly influenced or championed one or more of CHRA’s four pillars with systemic or national results.

This award celebrates an individual’s lifetime achievement and outstanding contributions to the affordable housing sector.

CHRA-Rooftops Canada International Service Award: Next Award is in 2021. Recognizes an individual or an organizational  member of CHRA that has actively supported Rooftops Canada’s international development work. This biannual award is administered by Rooftops Canada which selects the recipient in consultation with CHRA.

The deadline for submissions is January 18, 2021
For more information, see the complete Award Guidelines

The nomination and presentation of CHRA awards will be guided by the following terms: