About the Indigenous Caucus

The Indigenous Housing Caucus was established in 2013 at our annual Congress on Housing and Homelessness to recognize the large number of Indigenous-led and Indigenous-serving organizations who are members and wanted to work together for better housing for northern, rural, and urban First Nations, Métis, and Inuit Peoples. Indigenous housing and homelessness service providers across the country face several challenges to which the Indigenous Caucus is responding to with resourcefulness, good management, and innovation.

Since 2013, the Indigenous Caucus has grown both in size and influence, becoming a credible body for developing and providing Indigenous policy advice on housing and homelessness. The Indigenous Housing Caucus meets together in person once a year at the Indigenous Housing Caucus Day which takes place in conjunction with the National Congress on Housing and Homelessness. It is a full-day collaborative forum attended by over 200 delegates from across Canada, ranging from urban and regional non-profit Indigenous housing corporations, local homelessness service providers and regional homelessness coordinators, representatives of all orders of government, and private sector actors in academia and business.

The Working Group is composed of CHRA members from across the country with an expertise and understanding of Indigenous housing, including tenant support, building operations, cultural issues, and homelessness.

Previously, Indigenous friendship societies, housing associations and corporations served their local and provincial communities but there hasn’t been a common Indigenous voice nationally and only BC and Ontario have provincial representation. Now, members will contribute collectively across all regions and territories. Together we have the experience and expertise to create and deliver an URN Indigenous housing strategy – now we also have the coalition in place to get it done.

The Indigenous Caucus at CHRA organized and supported the Gathering and will continue to support the coalition.

If you would like to receive periodic updates on CHRA and the Indigenous Caucus' activities and initiatives, subscribe to the Caucus newsletter below.

CHRA and the CHRA Indigenous Caucus share its Statement on Reconciliation and Cultural Principles to demonstrate that our commitment to reconciliation with Indigenous peoples across the country. This is a continued learning process and CHRA will continue to engage with members to ensure their needs are met. Click to review the Statement.

In late 2018, the CHRA Indigenous Caucus commissioned a report and survey that looks at the state of urban, rural and northern Indigenous housing in Canada, and provides recommendations on a path forward to improve its state. The Canada Mortgage and Housing Corporation and Indigenous Services Canada provided funding to undertake the work and hired Daniel Brant and Catherine Irwin-Gibson to produce the report overseen by the CHRA Indigenous Caucus Working Group. The report stresses that urban, rural and northern Indigenous housing is facing dramatic challenges in the face of ongoing demand and pressures, but the report also identifies solutions and ways to address these challenges.

In late October, the Indigenous Caucus launched its "For Indigenous, By Indigenous" (FIBI) advocacy campaign. The campaign's focus was to raise awareness of the lack of an urban, rural, and northern Indigenous housing policy that was not included in the National Housing Strategy. By the end of 2020, over 10,000 letters had been sent to MPs expressing support for such a strategy! The Indigenous Caucus also initiated a petition which had over 500 signatures.

In June 2018 CHRA and CHRA's Indigenous Housing Caucus Working Group released a proposal for a "For Indigenous, By Indigenous National Housing Strategy" calling on the government to address the housing needs of urban, rural and northern Indigenous families and individuals, including the disproportionate representation of Indigenous Peoples living in homelessness and core housing.

The federal National Housing Strategy unveiled in November 2017 committed to working toward co-developing three distinctions-based First Nations, Inuit and Métis Nation housing strategies. However, the Government of Canada's distinctions-based approach risks creating a large service gap for the 87 per cent of Indigenous Peoples not living on reserve lands, but in the urban, rural and northern parts of Canada. To eliminate the service gap, the paper asserts that the federal government must acknowledge and fund a fourth strategy for Indigenous households in need of housing in urban, rural and northern areas.

During CHRA's Annual General Meeting in April 2018, members passed a strongly worded resolution supporting the development of an urban, rural, northern and metropolitan Indigenous Housing Strategy. It calls on the Government of Canada to develop a strategy that would set forth an objective of raising the standard of Indigenous housing to that of non-Indigenous Canadians within the next 10 years.

Signatories to this declaration are resolved to:

This Resolution is endorsed by the following individuals and organisations:

We encourage members and other organizations to officially endorse this Resolution. Add your support to the growing list. Contact kbrown@chra-achru.ca 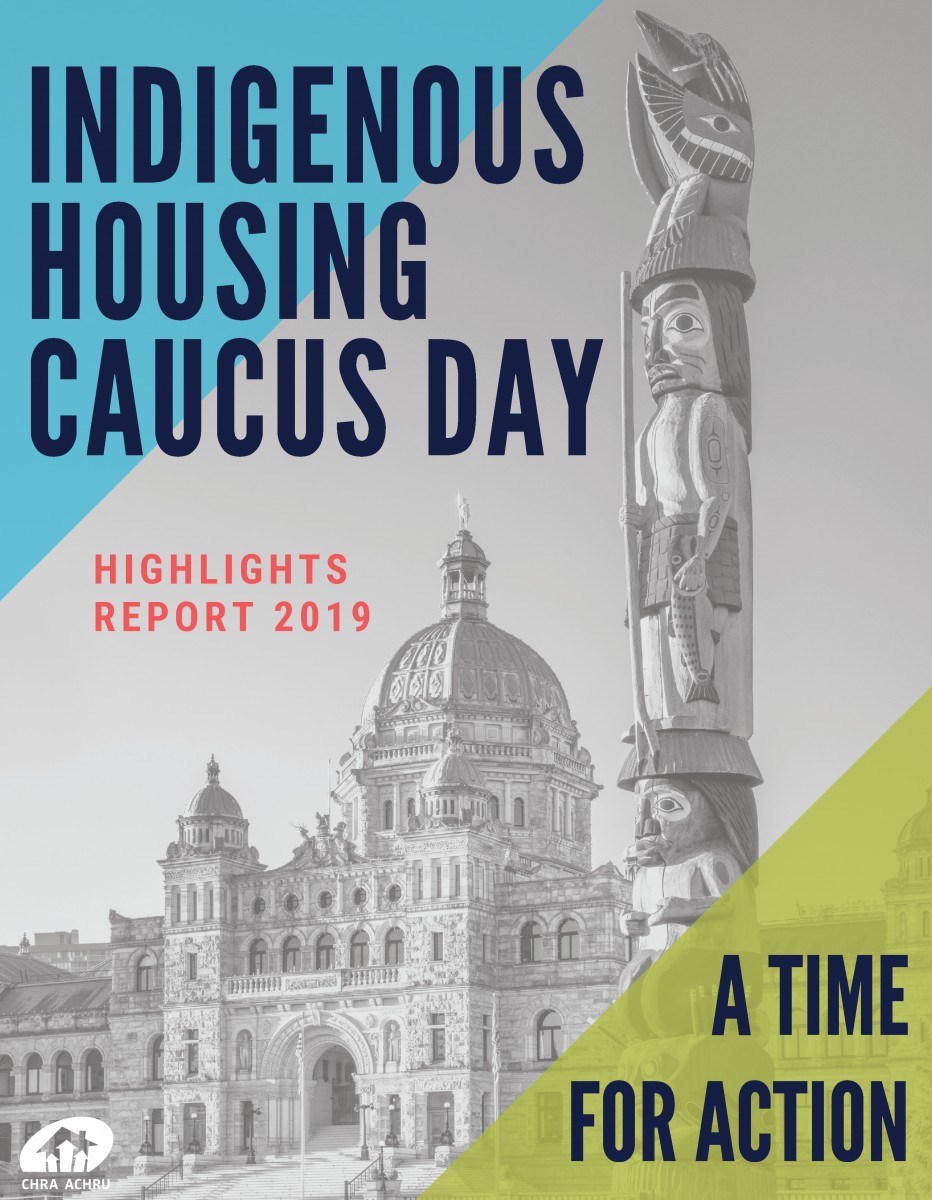 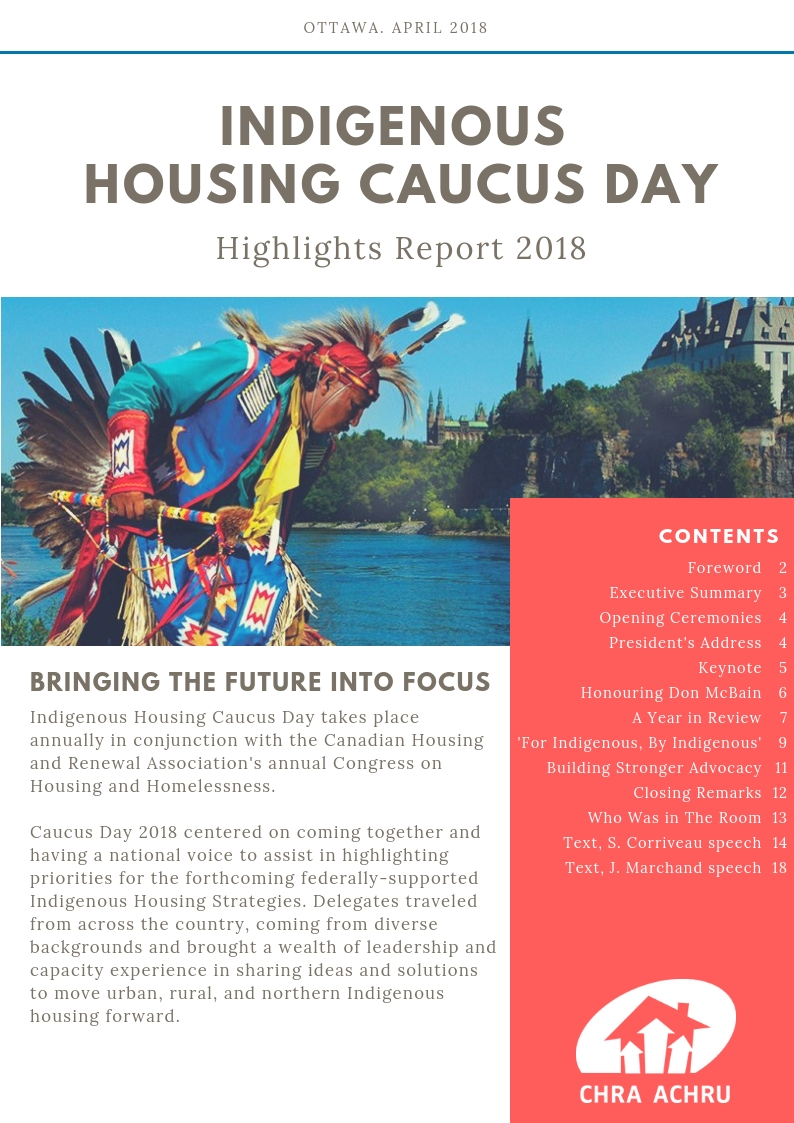 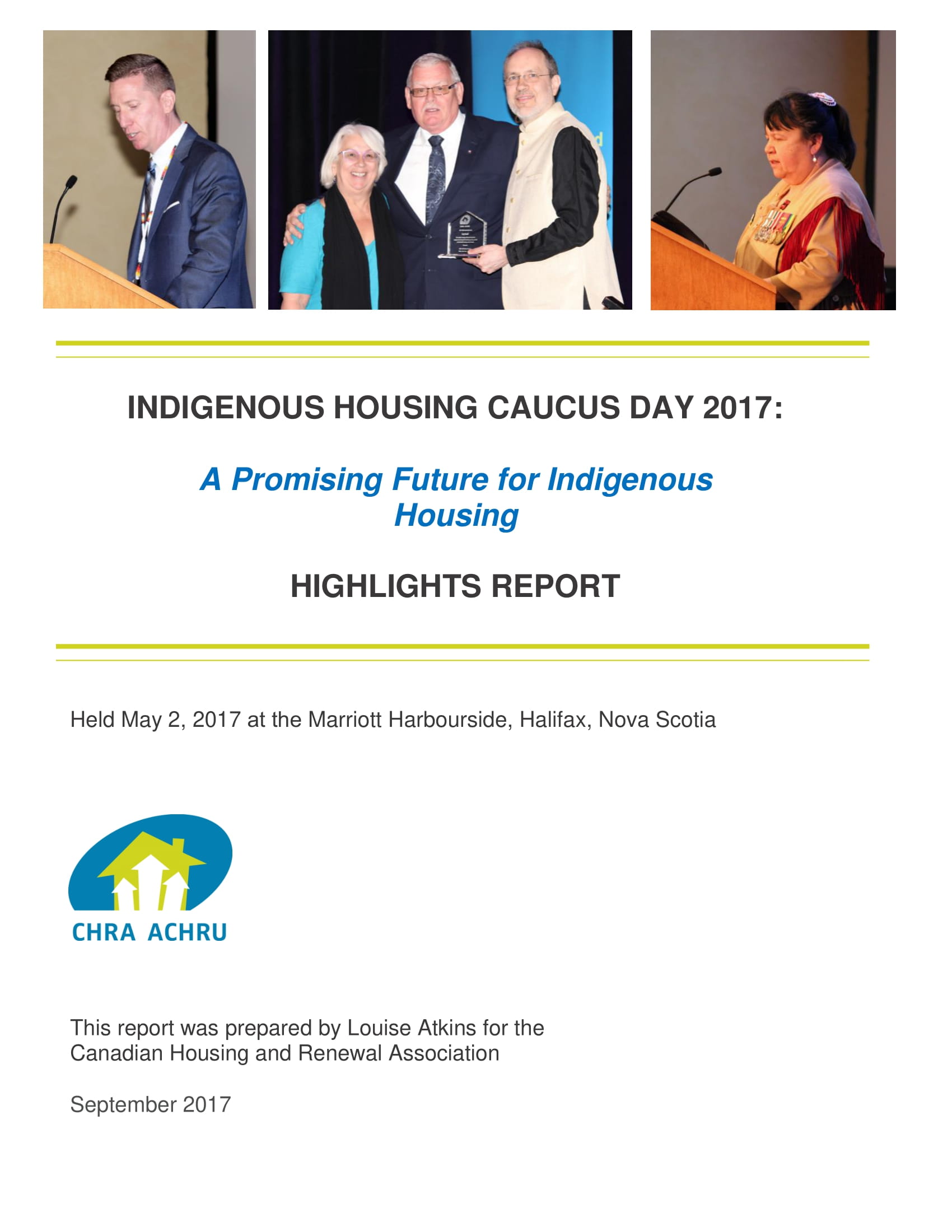 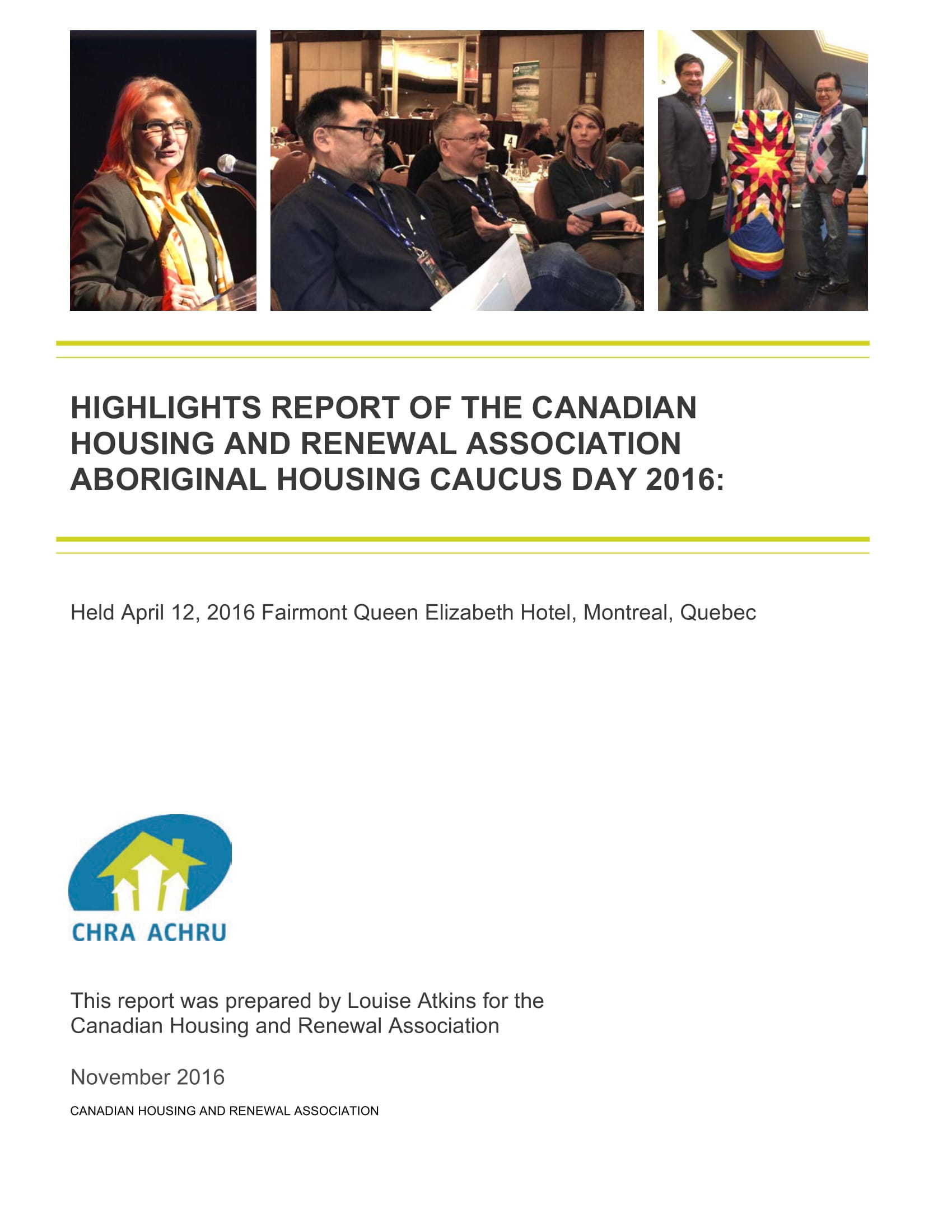 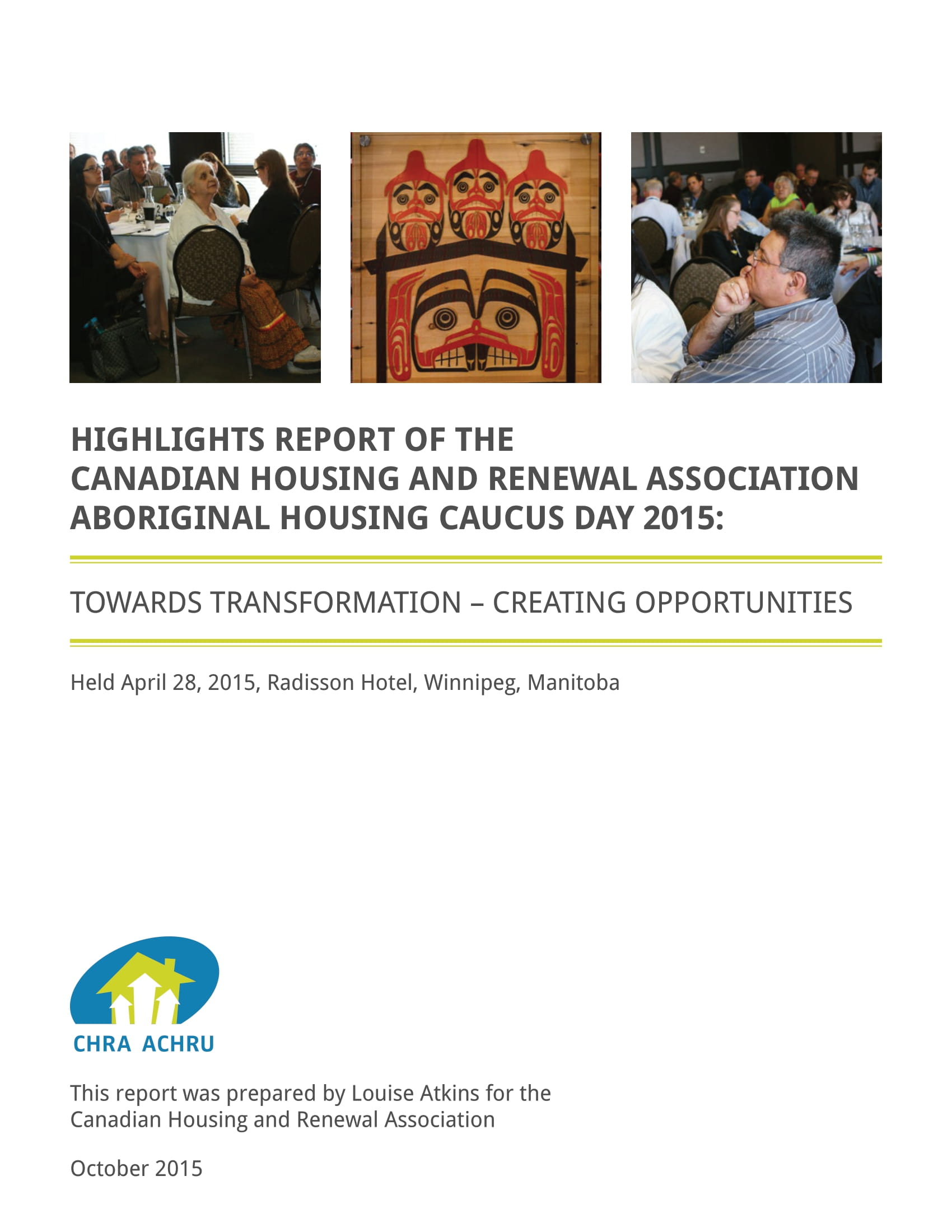 published by Cassandra Vink, with assistance from Steve Pomeroy and Jodi Ball

Case Study 4: Affordable Homeownership in Alberta with The HOME Program