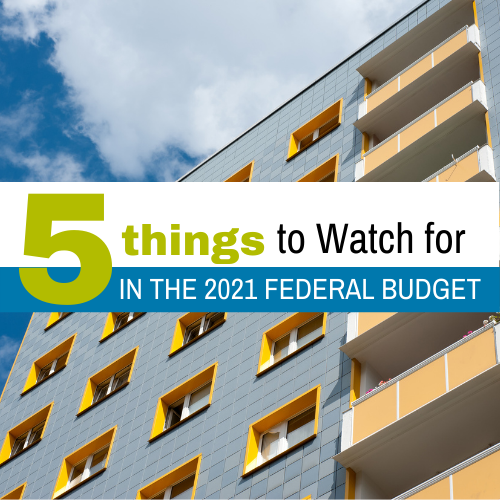 Speculation has been rife in Ottawa and among political pundits as to if, and when, the federal government might introduce its next Budget. 2020 was an odd year in that the federal government did not introduce an annual budget, despite hundreds of billions of dollars in spending due to the pandemic. However, given different statements from federal politicians, there appears to be a growing consensus that a budget will be in the offing at some point in the coming weeks.

If a federal budget is forthcoming, the question becomes, what should the community housing sector expect there to be in the budget? I’ve listed below the top five items that I and CHRA will be watching for in the 2021 federal Budget:

2. Will there be a Round 2 to the Rapid Housing Initiative?
When the Rapid Housing Initiative was first announced in September 2020, there was significant interest on the part of non-profit housing providers. Despite short application timeframes, interest was confirmed with over 680 applications worth over $6 billion received by CMHC, for a program whose budget was $500 million. This demand, and the updated mandate letter send to Minister Hussen by the Prime Minister in January 2021, would suggest that a second round of the RHI is forthcoming. Based on member feedback, CHRA has already written to Minister Hussen with recommended changes to the program if and when a second round is announced; we want to ensure that any new round is more responsive and effective for housing providers. Budget 2021 would be an opportune moment to announce a second round.

3. Will there be a plan to meet the Throne Speech objective of ending chronic homelessness?
In the October 2020 Throne Speech, the federal government included a commitment to end chronic homelessness in Canada. Although laudable, the commitment came with no timeline, plan, or resources on how to achieve this objective. Minister Hussen and CMHC have begun holding stakeholder consultations on this issue, although it is unclear when a plan or resources to support meeting that objective will be unveiled. Could Budget 2021 provide that opportunity?

4. Will the Federal Lands Initiative be expanded?
In the 2017 National Housing Strategy, the federal government unveiled a new Federal Lands Initiative intended to transfer surplus federal lands to expand affordable housing supply. Although welcome, the program was only provided with $20 million a year in funding, and only federal lands were eligible. Given the necessity of land for new development, CHRA has called on the federal government to expand this program by extending its mandate and increasing its budget – we hope such a measure will find its way in Budget 2021.

5. Will income supports and assistance be extended?
One of the most challenging aspects of the COVID pandemic has been its impact on income security, particularly for lower income and vulnerable populations. There were a number of income support programs introduced during the pandemic, notably the Canada Emergency Response Benefit (CERB) and extended EI benefits. However, the impacts of the pandemic are still being felt economically, and for tenants, the risk of evictions remains an ongoing concern. Will the federal budget extend income support benefits from those people in Canada still coping with the fallout of the pandemic, especially women and youth, and will there be other supports to directly address poverty alleviation?

The 2021 Budget represents a unique moment in time for the federal government to create a country that is more equal, healthy, and prosperous – and that starts with housing. We hope that the federal government will not let this moment pass and commit to Building Back Better in way that ensures every person in Canada has housing that is affordable and that meets their needs.

Jeff Morrison is the Executive Director of the Canadian Housing and Renewal Association (CHRA).