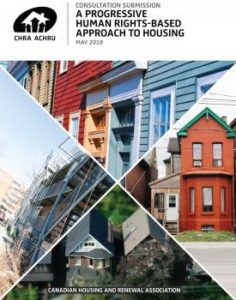 On November 22, 2017 the federal government released the National Housing Strategy (NHS), a $40 billion plan with an aim to help ensure that all Canadians have access to housing that meets their needs and that they can afford.

Chapter 1 of the NHS, Housing Rights are Human Rights announced that the federal government is taking “additional steps to progressively implement the right of every Canadian to access adequate housing” – a long-awaited action years after Canada had signed onto multiple international treaties, including the United Nations Universal Declaration of Human Rights and the International Covenant on Economic, Social and Cultural Rights, which recognize housing as a human right.

Prior to the release of the NHS in 2017, CHRA was among the leading organizations calling for a rights based approach to housing.  CHRA has provided its input to the federal government by letter, face-to-face meetings with Minister Duclos and other senior officials, and listening to our members. Two weeks ago, we sent in our formal submission in response to the National Consultation on a Human Rights-Based Approach to Housing.

Among the recommendations to the federal government made by CHRA include:

Legislating the right to housing should progressively ensure that every person living in Canada has access to safe, affordable housing. It will hold the federal government accountable for the safeguarding and implementation of a national housing strategy, and provide Canadians with the tools to see real results in addressing systemic barriers to accessing safe and affordable housing.

We look forward to hearing your views on this topic. Let us know what you think by sending an email to Dominika at dkrzeminska@chra-achru.ca..