Access to the middle class and elimination of homelessness
depend on adequate affordable housing supply. 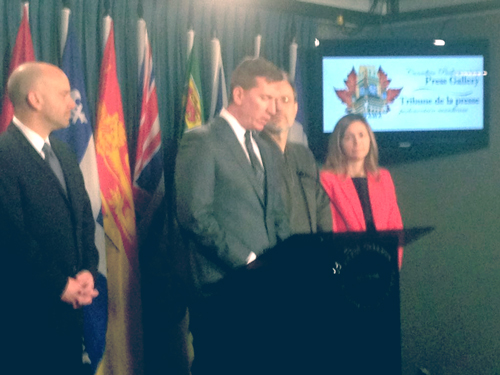 Today during a press conference on Parliament Hill, a coalition of seven housing sector leaders released a joint statement, Affordable housing: a foundation for social inclusion in anticipation of the federal budget.

Sector leaders call on the government to include the following components in its upcoming federal budget: protect and renew existing social housing assets; build 100,000 new social and affordable housing units; and support community transformation and innovation.

“It’s time to tackle Canada’s affordable housing crisis in order to restore this important pathway into Canada’s middle class,” said Canadian Housing and Renewal Association Executive Director Jeff Morrison, “and housing investment is a solution that can advance many government objectives as described in several of the ministerial mandate letters.”

Over the past 25 years, Canada’s population has increased by 30% while the annual federal investment in affordable housing decreased by 46%, according to the State of Homelessness in Canada report. As a result, nearly 1 in 4 Canadian households cannot afford their housing and 235,000 experience homelessness every year.

Currently, federal investments in social housing through operating agreements are set to gradually decline from $1.6 billion in 2015 to $0 in 2040, putting Canadian households at risk of economic eviction and possibly homelessness, according to a CHRA Report. In fact, the expiry of operating agreements has already begun.

By working with Canada’s affordable housing sector to develop a national housing strategy, the coalition believes that the government can meet both short term economic stimulus and long term social objectives such as ending homelessness, addressing the housing needs of Aboriginal people, combatting climate change, and reducing poverty.

“It’s urgent that we re-invest in affordable housing by creating those missing 100,000 affordable housing units nationwide over the course of the next five years,” said Canadian Alliance to End Homelessness CEO Tim Richter. “We should not forget that homelessness is a relatively new phenomenon in Canada—and we must seize this opportunity to significantly decrease its occurrence with the right federal investments.”

The coalition is pleased by the high level of engagement between its sector and Minister of Families, Children and Social Development Jean-Yves Duclos and Minister of Infrastructure and Communities Amarjeet Sohi, both sharing the mandate of developing a national housing strategy.

“Canada’s affordable housing sector, including housing co-operatives, are ready to help the federal government develop a national housing strategy, which would protect and grow the affordable housing stock,” said Co-operative Housing Federation of Canada Executive Director Nicholas Gazzard. “We look forward to a federal budget that will allow for these critical housing investments to take place.”

The joint statement is endorsed by the following housing sector leaders:

Click here to view an extract of the press conference.